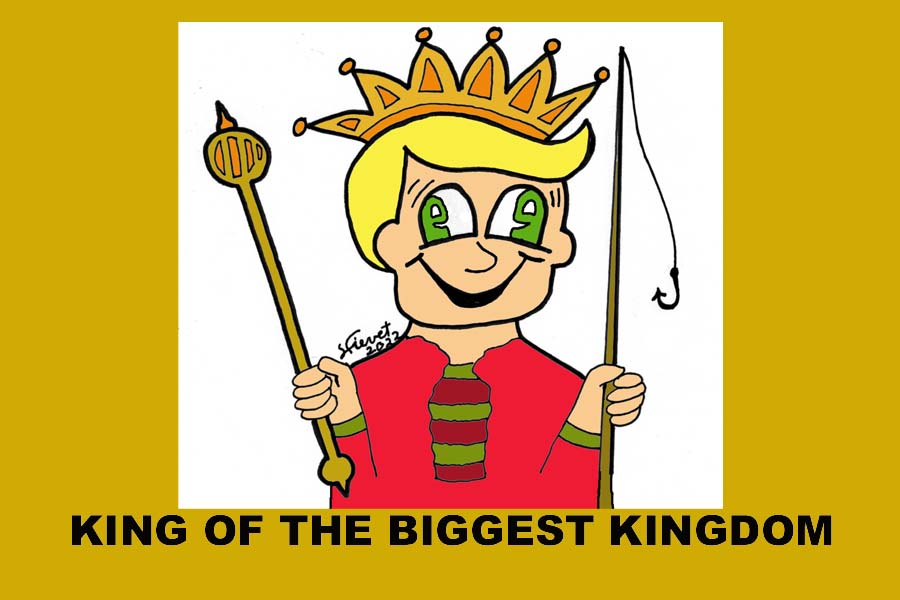 King of the Biggest Kingdom

The long hot days of summer was there already and Ronnie knowed it.  He spent his best days layin' real lazy-like down by the fishin' hole, stirrin' up dreams of landing the biggest fish anyone had ever saw.  Perched back up against a log, Ronnie was almost headin' into slumberland when he heard a voice.

"What kinda baitcha got thar?" the bold voice asked.
"Wuuuuh?" was all he could say at first.  After a couple of blinks he replied, "Just usin' all I got.  That's worms."
"Well that's yer problem, boy," the man said.  "You ain't never gonna catch nuthin' without the right bait."

And with that, the man put his hand in his trouser pocket and pulled out the most purdy damn cricket you ever seed.

Ronnie took hold of the cricket and eyed it closely.  It was all green and shiny and it made weird sounds.  He pulled his line in and replaced the worm with the new bait, much to the dismay of the cricket.

"Hey, thanks Mister!" Ronnie whispered happily.
"Don't mention it kid," the man said.  "When I was your age nobody kept me from bein' stupid."
"I ain't stupid!" Ronnie yelled.

Then he chased the man clear out of the area in a bang.  Before he knew it, he was alone again sittin' on the bank...thinking about how this new bait just might make a difference.  Within a few minutes his eyelids was gettin' heavy again.  But just when he started to nap, he heard a girl speak.

"Whatever have you got on the end of that line?"

The little girl must've not been more than eight or ten years old, but she had the neatest yarn-textured hair and an odd little smirk that made her look like an amoeba.  But she seemed like a right nice sort, if there was any.

"I'm a' usin' this cricket!" Ronnie replied as he proudly held up his new improved bait.
"Tsk, tsk...boys!"  the girl whispered, as her eyes rolled completely to the back of her head.  "You'll never catch nuthin' with that!"
"Well, what should I use then?" Ronnie asked, puzzled as to why yet another person was trying to give him advice in this particular area.
"They prefer cake," the girl said.

And before you could say Parking Lot Ticket, her hand displayed a right perfect tiny slice of pink and purple cake with swirly twirls all over the tippy top.

"Gosh, thank you!" Ronnie gushed.
"Gotta run or I'll be late!" she said before whiskin' away down the lane.

Ronnie removed the cricket, and managed to smush enough of the cake on the hook to make it stay.  Then he threw his line back in the water and immediately fell asleep.  Several hours later a strange sound woke him.

"What bait?" a deep voice growled.  "WHAT BAIT?"
"Uh...cake..." he said as he tried to focus his eyes on whatever it was that was speakin'.
"Never catch nuthin' with cake," the thing said.  "I know bait that will work."

Without giving it much thought, Ronnie pulled his line back in and removed the wet soggy cake from the hook.  Then he tried to hook the dark amorphous figure with it.

"Ouch, you HURT me!" the thing said loudly as it pulled away in a huff of thick black smoke.
"But I thought you wanted..." Ronnie stammered.
"You thought!  You thought!" the thing yelled.  "That's the one thing you ain't done is thought about NUTHIN'. . . !"

This was real scary for such a young boy.  So Ronnie ran right away home because he figured there was no point in fishing today anyway.  He ran as fast as he could.  But when he got home, all he found was a little cardboard box where his house once sat.  He picked it up and looked inside.  And there inside he found a beautiful jeweled crown and an exquisitely ornate scepter.  As he placed the crown on his head he heard a huge voice booming down from above the clouds.

"You is KING of the BIGGEST KINGDOM!" the voice commanded.

And with that, Ronnie felt a sharp jerk and found himself suddenly bein' yanked real hard by something.  Everything turned white and barely visible.  A shifting audio sizzle whizzed through the ocean sky before cuddling up to the waddle of shoo-shoo dog cameras.  Then, just as soon as it had started, it all stopped.

When everything had stabilized and was still again, Ronnie looked around and found that he was now living in a huge castle with midget servants catering to his every whim and need.  He no longer needed his fishing pole because he had a beautiful sceptre.  And instead a goofy little boy cap, a lovely crown was sitting on his head.  Ronnie felt good inside because he knew he would have the respect and admiration that he had sought for such a very long time.  He was now King of the Biggest Kingdom.

"Who gives a damn what fishes will and won't eat!" he declared.  Ronnie held his sceptre high and beamed broadly for all the world to see.

And that is how the horse got its mule wings to stay planted in place on the evenin' of the crackle shucker.  And this was all done before the chill of fall had even begun to grip the tippers of the mousey runt shoreline.