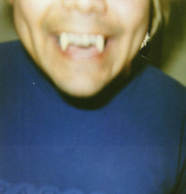 From Bubblegum To Sky:
An e-mail Interview with Mario Hernandez

From Bubblegum To Sky is Mario Hernandez. This e-mail interview took place February 2004 just after the release of the band's second album, Nothing Sadder Than Lonely Queen. Hernandez is an extraordinary songwriter whose bubbly music will send music listeners to another plane. The man is a pure pop genius.

OUTSIDE OCCUPATION(S): Park and recreation leader in a little town called Alameda.

Where does light come from?

Everyone matters. The government only wants you to believe that only charismatic, mysterious Volvo driving Berkeley types, black panthers and Abbie Hoffman had any pull with the "people." They all turned into pimps, married a Fonda and got HBO movies made after them. F*ck stars. We should behave like waves.

What do you usually think about?

Is public education a good idea or a bad idea? Please justify your answer.

Great for some, horrid for others. I didn't graduate from high school, but it was my problem, just as much the "schools." I was lucky I wanted to find out things for myself.

Why is everything a waste of time?

It's not. Good salad dressing can make or break a dinner party.

Should anything be illegal? If so, what? If not, why not?

Murder should be illegal. It's the only universal thing most people believe shouldn't be done.

What makes you laugh?

Which would you rather be: (a) an extremely famous celebrity who no one really respects or (b) a virtually unknown underground celebrity who is sincerely appreciated by a very small group of people? Explain.

Neither. I think we really don't need to make that distinction to be happy.

People who mix eating and music together. A burrito just before you hit the stage, or a bowl of pasta, before a vocal take, really upsets me. Vomiting from too much drinking and/or doing a line of coke is another story, however. Also, funny ska. Skamedy.

If you had to be a bird, would you be a bird? Explain.

I'm super afraid of flying so, being a bird would condition me not to be sooo afraid.

Does money motivate you? If so, why? If not, why not?

Has technology improved or damaged your quality of life? Explain.

Improved. I'm able to do this interview in my undies.

What is the one thing about yourself?

I'm half Mexican and Japanese.

Nine. It's when I first realized gurls were different than boyz.

Are attractive people bad people? Why or why not?

What is the first thing that you can remember?

Almost drowning in a kiddy pool in Japan. My older brother was evil.

How has vision affected your life?

It's been very helpful when I'm on the freeway.

If bubblegum were made of big old rag dolls named polly, what would all the polly dolls look like?

Write an instant poem or an instant story about anything of your choosing.

I felt the brown in your eyes.

So let's get there.

[Back to the Table of Contents]